It started raining last Sunday, at about 3.08pm.

I can’t tell you how much of a relief it was. The tanks were nearly empty, the grass was dry, brown and crackled beneath your feet. The dam levels were dropping. Everything and everyone looked parched.

It was beautiful, steady, soaking rain. Torrential rain when things were so dry and dusty would have been destructive, but the rain we got was just absorbed into the landscape. Within 48 hours there was a happy, fresh green tinge to the paddocks. Even the eucalyptus which usually cope so well with dry conditions, perked up.

Initially as the first run-off from our roof started pouring into the tanks, you could hear the echoey splashing deep down in the cavernous belly of the tanks. We’d come so close to running out, and with a month-long wait on water delivery, it would have been a long, hot and very dry December.

We got 59mm over the next day and half and it felt great. But, as any real farmer (i.e. not me) will tell you, that kind of rain is only good if you get the ‘follow-up rain’ a week or so later. You need the follow-up rain to really push things along, help the pasture and crops grow. Well, here we are almost a week later, and guess what? It’s raining again. More gentle, soaking rain. We won’t know ourselves in a week. Heavens, we might even have to get the lawn mower out! Wouldn’t that be something.

You know what was so memorable about the rains last weekend though? The birdsong that accompanied them. I stood out on our verandah and listened to the cacophony of bird calls. They were clearly as excited about the rain as we were. Birds launched themselves through the air and rain seemingly in celebration. They were playful and energized. Some sat high up in the spotted gum trees near our house, calling out to their friends. All the birds were singing their little hearts out.

I had worried that having a dog would keep the bird life away. But it turns out that Jones is quite the feathered bird companion. They love him. Especially the brave or perhaps I should say, brazen ones: Magpies, Noisy Mynahs, Butcher Birds and of course the chooks. 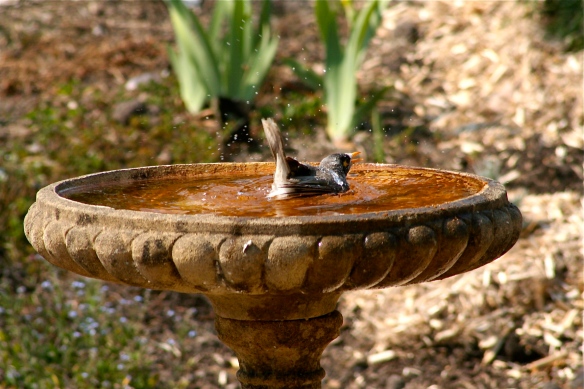 The chickens top the list as far as brazenness goes. They play a great game with Jones these days called Grab That Bone. It goes something like this: Jones has a bone, one of the chooks tries to steal it from him. Jones picks it up in his mouth and playfully runs around the chook, teasing her. He then stops, crouches down, chin and paws on the ground, bum in air, tail wagging frantically. The chook approaches, and pecks him on his nose. Jones runs away fast, invariably dropping the bone. The chook dives in, grabs the bone and assuming it’s not too heavy for her, she’s off with it, Jones in hot pursuit. It’s hilarious to watch.

Some of the not-so-brazen birds who are regular visitors include the Scaly Breasted Lorikeet  and the Eastern Rosella.

By feeding the chooks with the contents of the chook bucket you normally attract a flock of birds to the scene. Jones likes to supervise the whole affair. If there are tasty morsels that appeal to him, he’ll quickly and quietly swipe his prize. Otherwise he just tends to sit amongst them, keeping an eye on things. Usually there will be about five butcher birds on the fence overlooking proceedings and they are often joined by about four resident Magpies. Jones watches this lot too, running at them if they try to swoop and take any of the chook food. The butcher birds are sneaky though, and quick. They dart in and out before Jones has a chance to react. Off they fly with their loot. 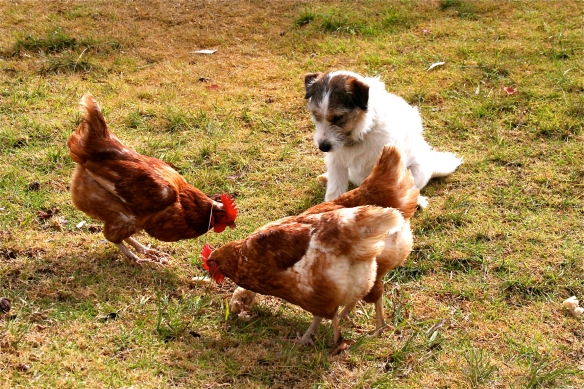 The butcher birds love to play with Jones. They will gather around at Jones’ dinner time waiting for him to lose concentration and wander away from his bowl. And they fly in, surround his bowl and devour the little dog biscuits, until Jones spies them from the other end of the verandah. He tears back towards them at full speed, skidding to a halt and sending them off in a flurry of feathers. He scoffs, struts and puffs his chest out as if he is so tough, the best bird chaser around. ‘Ha!’, he seems to yell at them.

I’ll often end up moving Jonesy’s food bowl inside to help him out, but if you’re not careful, the birds will just head inside to continue their feast. I’ve written about the fun and games we’ve had with them (and the chooks) before. They’re very cheeky, those butcher birds. But their song is such a redeeming feature, I forgive them all their antics.

If you’re not sure what the song of a butcher bird sounds like, check this out.. and imagine it amongst other various bird calls along with the sound of rain falling on a tin roof. That’s what I’m listening to right now.