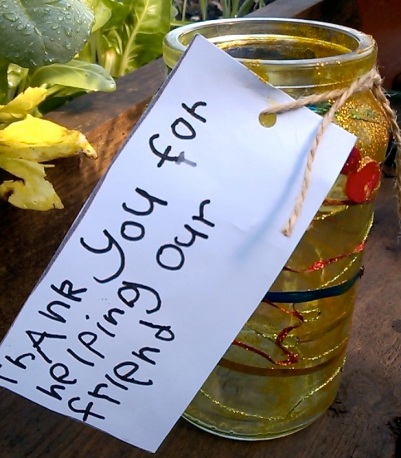 ** In a sad note today, we have heard the little boy passed away peacefully this afternoon (Wednesday Nov 25). There are no words, except to say we are thinking of him and his family.

With my four-year-old at a not-for-profit community preschool, I sit – not very well admittedly – amidst a wonderful preschool committee. Not so long ago – about 8 weeks ago actually – our committee heard about the sibling of one of our preschool children. The seven-year-old had once attended our preschool but was diagnosed with cancer early this year. Now, after several months of treatment, they stopped it. It wasn’t working.

I wonder at the power of empathy and if humanity listened to it more would the world be a better place?  For myself, after I heard the news I would just start crying at odd times. I have shed tears all over the place, and I don’t even know the family. And it wasn’t just me.

It very quickly became obvious to us all that we had to do … something. After all, though nothing could fix this, perhaps, perhaps, perhaps there is some small comfort in knowing that your community cares.

So, the preschool committee kicked into gear and this is the result.

Under the skilled hands of the musos from Stomping Ivories, guests danced, bought raffle tickets, bought donated kransky sausage rolls, bid on auctions for donated goods and patronised the licensed bar enabled by the local publican (at cost) which was manned by accredited teenage volunteers. Our preschool director motivated a silent hall in a call for action during which a tear could be heard to drop. Here is an edited excerpt of her speech.

“I would like to share with you the heart breaking story of why we are here tonight. The family we are helping out tonight are on a tough journey. They have 3 children aged 9, 7, and 5, all of which have attended our preschool.

“Their journey began around a year ago when their 6 year old son had a sore shoulder. After going through a number of tests they discovered that the lump was cancerous… I have watched this family go back and forward to Taree, Newcastle and Sydney hospitals this year for appointment after appointment. I have met their extended family as they stepped in to try and keep school routines happening for Miss 9 and Mr 5. The family were recently told that the chemotherapy was no longer working and that treatment would be stopped. As time has gone on it was becoming harder and harder to manage the pain. The family were told that there was not much more the doctors could do and they should try to concentrate on keeping him at home and in as little pain as possible…He has had surgery…they have had to amputate his arm to try and relieve the pain.

The family has now been told by doctors they have a limited time left with their child [now in hospital]…so I ask you tonight to dig deep for a family who are on the toughest road possible and even though we do not know them personally we would like to help in whatever way we can.”

And wow – didn’t they respond. It is worth remembering that this is not an affluent community, and in fact it resides within a region of high unemployment and an average annual salary of approximately $40,000 (more than $11,000 less than the national average). But on the same day of Paris’ horror, amidst weeks of terrible events during which I (and no doubt many) wondered at what we have as a global community become, approximately 130 people raised just over $14,600 for that child’s family in one night. Most people there did not know who it was for – at their request, the family remain anonymous for the sake of their son. Yet neighbours, friends and strangers generously battled it out for items they never knew they desperately needed until then. Tradesmen and businesses donated goods and services on the fly. Our auctioneer Dave, swapping the cattleyards for Nabiac Showground Hall, had numbers bouncing off the walls as donated items sold for more than their actual dollar worth. Tractor work, floor sanding, accommodation packages, restaurant vouchers, car tyres, car services, turf, whipper snippers, gardening stakes, photography packages, home styling, it was all up for grabs. Then there was the father who paid more than $600 for a second hand but pristine celebrity watch (he too had once been the grateful recipient from a similar community fundraiser for his young son, now well) and another guest who amongst his prizes donated $500 simply ‘if everyone in the hall got up to dance.’

Well what a dance it was. It was more than a week ago, and it was my birthday and like many that night I cried with both incredible sadness mixed with wonder.  Because it is a timely reminder in today’s world, that alongside the horror there is also generosity and empathy. I am humbled to live amongst some of life’s beauty right here and I am grateful for the timely birthday lesson. Because whilst there is no solution for the family during this incredibly sad time, no solution for what’s going on elsewhere, hopefully it’s a small, even tiny, comfort to know that there are many who care.

Thank you Nabiac and surrounds. It seems you’re never too old to learn.