We now have a chest freezer full to bursting of beef. Scotch fillet, sirloin, rump, top side steak, round steak, osso bucco, steak for casseroles and stews, beef for roasting and beef for barbecuing, beef mince and beef sausages. Except for T-bone steaks (we decided against them), you name it, we’ve got. Anyone dining at our place over the coming months, be warned, beef will be on the menu. 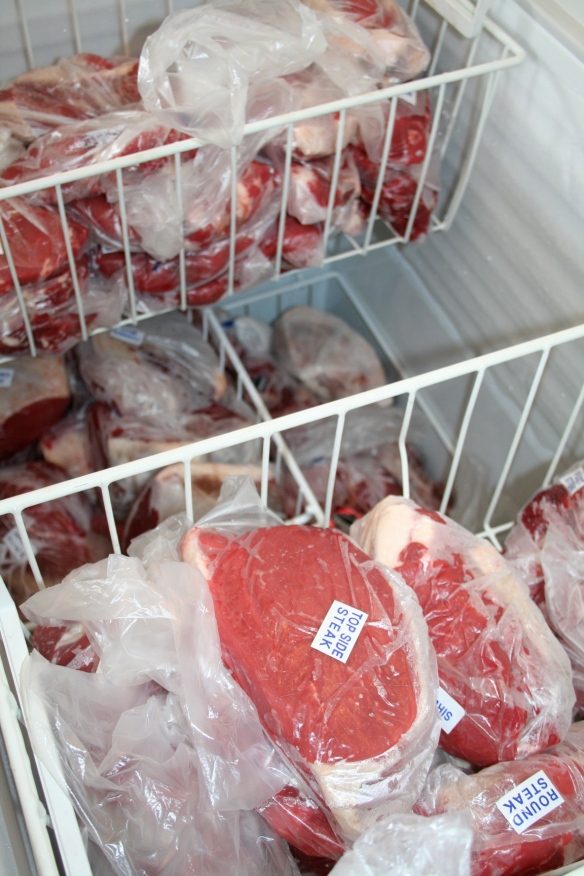 We planned this home kill many months ago and I blogged about the whole conundrum at the time we bought the steers, aged 7 months. The deed has now been done, and I’m happy to report that it went smoothly, there was no trauma, no stress, no suffering, there weren’t even any tears from me. A mobile butcher from Barrington (near Gloucester), whose name is Rod, came and managed the whole process for us. He was compassionate, professional and held our hands, metaphorically speaking, through our first home kill.

A couple of days before Rod was due to arrive, I walked some feed down to the steers who were happily grazing in the back hill paddock. All three of them heard me as I called them down, they turned to look in my direction and cantered down the gently sloping hill towards me. My heart always skips a beat as they do this. Will they stop in time? Will I be flattened? Will I get pinned against the barb-wired fence? Of course I didn’t, but three hefty steers racing towards you, when you’re far from being an accomplished cattle woman is still somewhat intimidating.

They skidded to an abrupt halt just in front of me and turned to sniff deeply at the lucern hay that I’d dropped into a nearby trough. The three of them jostled and tossed their heads. The sun was setting behind the hill, its last rays of the day warming me in the cooling evening. I didn’t have a camera with me to capture the moment, so instead I leant hard against a wooden strainer post and listened to the chomping sounds coming form the steers. Occasionally they’d look my way to check I was still there, but mainly they were focused on the hay.

As I watched them, I noticed that of the three, one steer was more dominant. Pushed the others out of the way, tried to get more hay, head-butted with impunity. I suppose I was relieved to think that he was the one going. The other two are so gentle and calm. 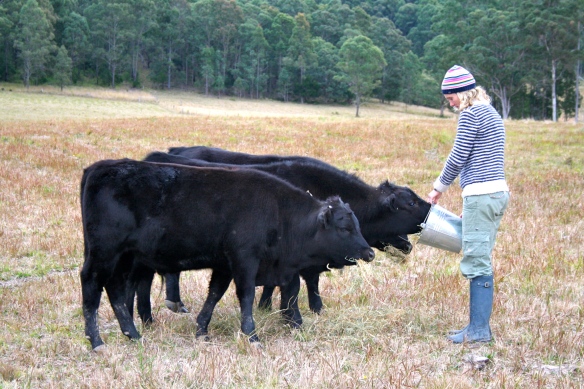 The day Rod pulled up, his portable cool room in tow, Paul also came. Paul and Chantal, friends of ours are sharing the ‘beast’ with us. Half in their freezer, half in ours. Paul, Hubs and Rod headed down to the Back Paddock, Rod carrying his gun.

I chose not to join them. I didn’t want to see the steer get shot. I didn’t want to see him go down. And so I stayed up nearer the house. I went as close as I dared. About 150 meters from our house is our swimming dam, in what we very creatively call the Dam Paddock, and this is where I stood, on the edge of the dam. Another few hundred meters on, down through an old creek bed and up into our back paddocks, Hubs, Paul and Rod were gathered.

Suddenly a gun shot rang out, loud and shattering. It echoed up the valley. A bird nearby screeched. My chest tightened. I looked up, into the eucalypt-covered hills surrounding us, not in the direction of the steers.

Only one shot, thank god. It must have been quick.

I then turned and walked back up to the house.

Later, I would badger Hubs with questions. I wanted to know: “Do you think he knew what was happening? Did he just crumple to the ground? Was it as quick as it sounded? What did the other steers do? How did they respond?” I’d had visions of the other two running for the hills, hiding behind trees, trying desperately not to be seen. Turns out cattle don’t think quite like we do.

According to both Hubs and Paul, it was quick. They’d called the steers to them, and they’d come, of course. They stood grazing, and then the bullet. The steer had not seen it coming. The remaining two turned to look and then, apparently, returned to their grazing. The steer was ‘dressed’ in the paddock and a carcass was brought back up to the house hanging from the bucket of the tractor. I have to say it did look gruesome, but it was clean and no longer looked like a steer. It had made the transformation into ‘meat’. Even The Kid saw it as this stage, proclaiming it was “disgusting”.

Rod divided the carcass into four sections and Paul and Hubs helped him lift each one up onto a hook in the cool room. The chickens pecked madly at the ground beneath where the carcass hung. Jones hid. I wondered what he was thinking. 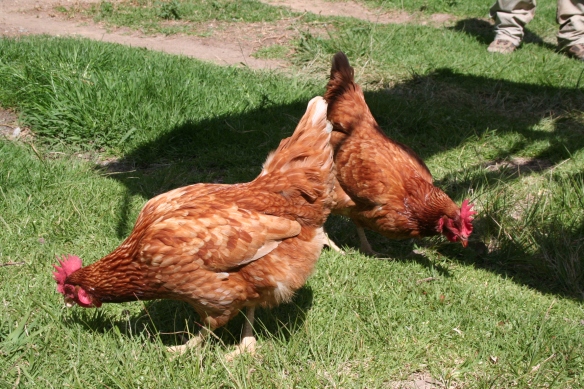 The cool room sat at our place for a week and then Rod returned to butcher the meat. Rod’s wife and two children came with him. While the kids played games, Rod and Sharee busily turned four large sections of the carcass into bagged and labelled dinner-size portions of meat. They minced the scraps which we bagged as mince meat and the rest was used in the sausages. The chickens went crazy. I had to lock them up to stop them from climbing into the mince bucket. When it came to the dog bones though, we let them peck away to their hearts’ content. 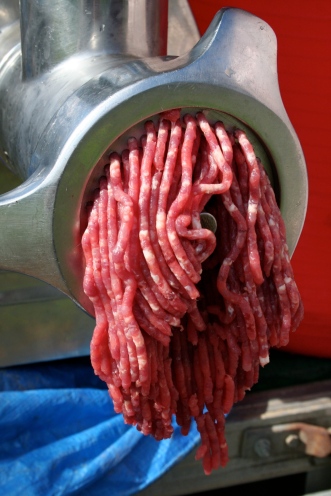 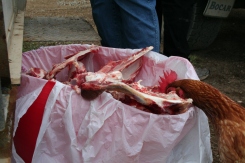 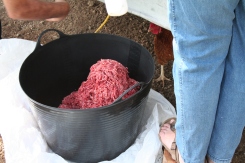 The meat that is now filling our chest freezer, some of which we have already eaten, is tender, lean, free of anything ‘un-natural’ and tastes pretty bloody good. The beast from whence it came lived a happy and contented life here. He never went hungry, he was never yelled at, never poked, never prodded, never trucked anywhere in his life. He was never stressed, and you can tell.

Having trucked our first mob of steers off our place earlier in the year, I now appreciate how stressful that can be for cattle. I guess I’d thought they might all pile onto the truck, heads down awaiting what came next. But instead they all had their heads held high trying to see over the sides of the truck. They wanted to know what was going on, where they were going, why were they leaving this place? They were not happy, and neither was I. Tears were shed that day.

How privileged am I, to sit here pondering the idealogical for’s and against’s of slaughtering beasts and eating meat, when in other parts of this world, right this minute, people are living in such frightening and dangerous circumstances that words cannot even describe. Many people would be happy just to know they had something, anything to eat for their next feed. I will savour and appreciate every meal, every mouthful of our home-grown meat.

I’ve just got back from checking on the two remaining steers. They are still as happy as Larry. Munching, drinking and just hanging out. They have no idea how good they’ve got it.