… one from the SBS studios in Sydney, Australia, and one from Brazil.

Yes, I’m the one who’s a long way from home, in the land of the Samba, Carnivale, caipirinhas, and futebol.

Joining Hubs, who is working over here, The Kid and I came to Brazil just in time for the first game of the 2014 World Cup. Thankfully and excitingly (for a family whose schedule is dictated by the global cycle of football), it turns out that at 5 years of age, The Kid is more than happy sitting in a bar watching football game after football game. His Dad is relieved, happy and very proud.

We’re now in Vitoria, the coastal city which is hosting the Australian team. The Socceroos are staying here, training here, and when they get small pockets of time, they’re seeing their families who are also based here.

Before Vitoria, we had a week in Rio, staying at Ipanema. Rio de Janeiro is a spectacular city, geographically breathtaking. It is colourful, vibrant, eclectic and full of life.

Always a city with a buzz, Rio de Janeiro is on steroids now with the World Cup in action. 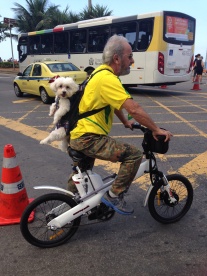 Rio is also a city of incredible contrasts and contradictions. Walking the length of Ipanema beach, you can’t help but be struck by the juxtaposition of the multi-million dollar (double that in reis, the Brazilian currency), palatial apartments overlooking the beach and the ramshackle favelas that spill down the hillside at the end of the same beach.

The favelas have equally spectacular views but with living conditions many of us back home in Australia cannot even fathom. Housing structures in the favelas are built by their inhabitants, they siphon electricity off the city mains, they self subsist with shops and other services offered within each favela. They are contained communities. But during times of heavy rain the sub-standard buildings are susceptible to collapse. Guns and drugs apparently are rife. Favelas on many levels are dangerous places.

Beneath them on the beach, tourists and locals seemingly without a care in the world, sit on rented deck chairs, sipping drinks and eating food that is sold up and down the sandy shore by wandering vendors. You can also buy sarongs, bikinis, hats – you name it, someone will be selling it. 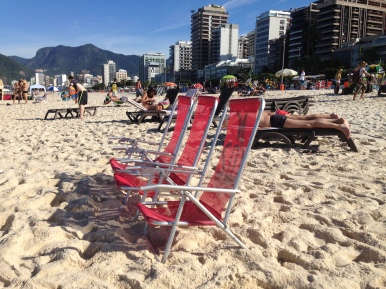 These extremes of rich and poor can be seen at every turn. Our Rio hotel was next door to where the Dutch team is staying. When the team would leave for a training session or game, a major operation was activated involving 2 large military trucks loaded with riot police, about 4 small police cars, 6 large Federal Police SUV’s, and countless police motorbikes. Players were ushered to their awaiting bus, shielded from the large crowd by the stony-faced riot police. And the entourage would then depart in a flurry of blaring sirens, flashing lights, and the biggest machine guns I’ve ever seen (and ever want to see). Major road arteries were cleared to allow the spectacle to pass. Unbelievable.

While observing the spectacle, someone next to me commented, incredulously, that locals can’t even get police to attend to their security issues, and yet it appeared that the entire Brazilian police force and military are being mobilised to move a bunch of footballers around the country in buses. Hmmm.

More alarmingly, the gross misappropriation of funds during the countries preparation for the World Cup, leave Brazilians feeling completely ripped off. Hundreds of millions have been spent on stadiums in at least 2 locations that don’t even have football teams in the Brazilian league. Hosting big fixtures during the Cup, the stadiums will then lie deserted and redundant, symbols of a corrupt political system.

No wonder the people protested.

The paradox though is this: Brazilians love their futebol. And I mean LOVE. They call Brazil the spiritual homeland of football and I can see why. The locals love it, live it, breathe it. And so they feel conflicted. While they desperately want their team to win the Cup, they also know that winning the ultimate prize will prevent any scrutiny, questions will not be asked, people will not be brought to task. The injustices of this tournament for Brazil will be covered over with a small, but heavily coveted and very valuable golden trophy.

With Australia now officially not able to progress to the Round of 16, I’m not sure if I’ll support Brazil or not. I love the place and the people, but the overtly corrupt ways of their “leaders” can only leave you feeling sick.

On a brighter note, tomorrow Australia plays Spain. And I can’t wait to cheer them on. The Kid and I will watch the game in a bar, and hopefully the local Brazilians will be on our side.

We were lucky enough to actually be at the Australia v Holland game. What an incredible experience! We screamed, and cheered with conviction for a team who we knew could win. We so nearly beat Holland, a super-power of world football. Amazing. We left the ground, devastated and proud, in equal measure. Holland went into the game naively thinking we would be a push-over. We were anything but. And it felt good.

5 thoughts on “Two Becs do the World Cup”