In fact, before I go on, I think it’s probably best that I include a warning. Here it is:

The thing is, one of them is going to end up on our dinner plates. Hmm, yes, that’s right. And there is certainly part of me that doesn’t feel all that comfortable about it.

This is what I do like about it however: they were born on my Mum and Dad’s property (i.e. next door) so technically they just had to walk through a couple of gates to get to our place. There was no truck involved, no stress. They belonged to a guy named Mark who for many years has agisted cattle on our place and on Mum and Dad’s, but now that we have our own cattle, he has slowly moved his on. As he moved his final few cows and calves, we decided to keep (or rather, buy) three of his weaner steers.

For a number of days we kept them inside the yards with a trough of clean water, space to move around, and a twice-daily feed. We did this so they would become familiar with their surrounds and with us. Once they were happy to come to us, they spent a few more days contained in the larger yard paddock. Same deal, twice a day feeding. Gradually they began to smell us, to trust us and to walk with us.

They now have the run of two adjacent paddocks and each evening we bring them back into the yards to feed them lucerne hay and weaner grain pellets. Most nights they are already waiting for us, but the other evening they were down the bottom of the second paddock, near the creek. The Kid and I had to walk down to them, and  entice them back to the yards with feed. The Kid gently called them as we walked. These steers will learn to respond to his voice. The thought made me smile. 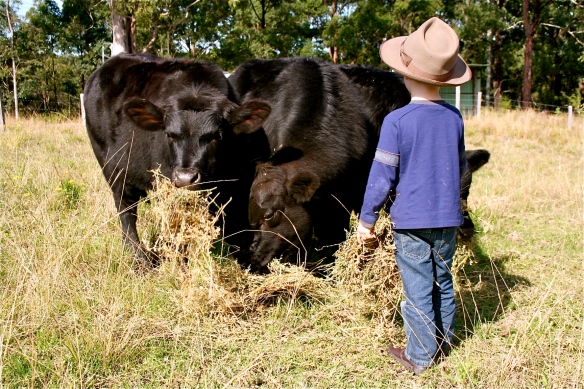 We walked back through the paddock up to the yards hand in hand. In my other hand I carried the biscuit of hay and managed the bucket of pellets as well. The three steers following close behind nuzzling and pulling at the hay. I could feel their warm breath on my skin. It was comforting in the cold evening air.

There is one who is braver, bolder. He comes straight away, is always the first to eat from my hand. He has a red stripe down the centre of his back as though someone has applied a semi-permanent rinse, called something like Back Cherry. I pretend not to notice. Damn them and their distinguishing features. I don’t want to be able to tell them apart. I do not want to get attached.

They certainly don’t and will not have names. I couldn’t bear that.

Yesterday one of The Kid’s little friends dropped in for a play with his Mum, Chantal. It is with Chantal and her husband Paul, that we’ll ‘share’ one of the steers. So, on their way out, we took them to meet and feed the steers. The boys tore down the dirt road on their bikes, the sky was grey and squally and it was cold. The steers were waiting and eager for their feed. The Kid took his little mate into the yards, with Chantal and I close at hand, the steers following behind. Both boys moved over to the far side of the yards and climbed up the railings, The Kid providing instructions. He knows the drill. Stay calm and assertive, quite voices, no running and keep away from them when they’re in the yards. Although they’re only 7 months old, the steers are big and heavy and my little 4 year old is tiny and fragile by comparison. So is his friend.  Chantal and I savoured the moment, these little boys watching and learning. The steers buried their wet noses in the hay, their long dark tongues wrapping, twisting and pulling at their feed. Their faces, so soft to the touch.

Despite my reservations, I like the fact that the one we are going to… (gulp) eat, will never have to leave this place in a truck. He will live a happy, contented and quiet life. A guy will come and … (bigger gulp) end the steer’s life before he knows what’s going on, hang him in a portable cool room and then return a week later to butcher the carcass, leaving us with all manner of cuts of meat to load into our freezer.

I am a meat-eater. My blood type craves it and my predisposition to iron deficiency means it’s a good thing.

But they are such beautiful animals, their faces so innocent and kind. Their warm, heaving bodies press against yours taking the chill off the evening air.

But if we’re going to eat meat then I want to know where that meat comes from. That the animal has been well cared for and that it hasn’t been traumatised. We can ensure this. We can look after them and take care of them.

But, if we care for them and get to know them, what will I do the day the guy with the portable cool room comes? I will have to be somewhere else.