One of the chooks is lame. We’re not sure what happened, but I have a nasty, sneaking suspicion that Jones might have caused some damage in a rumble. He generally leaves the girls alone these days, but if it wasn’t him, I have no idea what or who it was. Does he look guilty to you?

Jones has actually learned to live with the chooks, to co-exist with them peacefully, to even play with them sometimes. The other day, while farewelling some friends, we watched as one of the chooks, standing tall and confident faced-off with Jones. He was standing alert (but not alarmed), staring her down. Suddenly, the chook, fancying her chances, pecked Jones, hard and fast in the nose. He retreated to hide behind the tractor and when he thought it was safe he bounded out again and confronted her, only to get pecked again in the face. He seemed incredulous but at the same time so surprised he wasn’t sure how to respond. A short game of dog and chook (you know, like cat and mouse) ensued. It was thoroughly entertaining. No damage was done to either party, and eventually the chook got sick of it and strutted off.

On another occasion recently, I was washing up and looking out of the kitchen window I could see Jones shoulder-barging one of the chooks. Aside from the pecking incident, as I say, they tend to live very happily together, so I was surprised and a little annoyed with him for harassing her. They were firm, strong shoulder-barges aimed at putting her off her stride. I called out, expecting him to move away immediately, but he was determined and focused. I ran out to them, and on closer inspection, discovered the chook had a live mouse in her beek. Jones, in good form was actually going for the mouse, not the chook. Many a sporting coach would have been proud of him. I have no idea who had it first. The chook or Jones? But I could almost hear them both saying, like any normal 2, 3 or 4 year old, ‘it’s mine!’, ‘NO, I had it first, give it back. NOW!’

Jones won in the end. Thankfully he promptly killed the poor little thing (who must have been very traumatised by the event) and ate it. The chook looked on in a huff.

Last time I blogged about the chooks, we still had 4 of them. Some weeks back, I was putting the chooks to bed and noticed one was missing. I called and called. Immediately I knew something was wrong, because they respond to my call so promptly. We never saw her again. I can only assume a wily old fox took her. I mentioned this in passing at our local (small) cattle sales the following week, to an old-timer, and I voiced my surprise at not having been able to find even a trace of her, not one feather. ‘The feathers won’t be on your place love. They’ll be on a neighbour’s. All over the joint. He would have carried her away as quick as you like, and then finished her off when he knew he was safe.’ ‘Oh’ I simply said in reply. Gulp.

So back to the original story: our lame chook is now laying her eggs in random places. She’s not as agile as the other two and is unable to clamber up onto the haystack in the shed, which is where they love to lay. I found one egg this week in the tomato plant by the shed, and I’m sure there are others hidden around the place. Actually, now I know there are others in hiding.

You see, Jones found one of them. It must have been lying around for some time. It was black inside, totally rotten, and disgusting. Putrid actually. Not having had any experience with rotten eggs before, when I saw Jones playing with it – Dad drew my attention to it, I crushed the remains of the egg into the grass with the sole of my boot, hoping to dissuade Jones from any further rotten egg carry-on.

Dad had come down to help me re-locate a lick block for the cattle. It’s winter and we don’t have many winter grasses, so to supplement their feed, you can put a lick-block in the paddock which the cattle will, lick, funnily enough, and it’s full of all the vitamins and minerals they need. We’ve got ours in a large bowl fashioned from an old tyre and it was quite heavy so I needed a hand lugging it into the back of the ute.

Dad, The Kid and I piled into the ute to drive down to the Yard Paddock to pick up the lick-block and take it down to the Back Paddock, into which I’d just moved the cattle. At the last minute, Jones leaped in with us. I wasn’t thinking. Clearly. It took a millisecond and his rotten egg breath had filled the cabin of the ute. I should have heaved him straight back out again, but as we drove down the driveway, Dad and I were already heaving ourselves.

We’d simultaneously and instantaneously wound down our windows as fast as we could (no electric windows in the ute), and hung our heads out of our respective windows as far as we could safely manage in order to suck in the fresh air. Inside the cabin of the ute, we dry-retched. My eyes filled with water. You could have cut the foul air with a knife. It was, quite simply, horrific. Meanwhile Jones leapt excitedly from the back seat to the front and back again. He was in a frenzy. ‘Hhhuuuugggghhhhh!!’, I yelled at him, which was a combination of trying not to chuck my guts up and ‘what the hell are you doing Jones?’ Then he found what he was looking for, the remains of the rotten egg on the sole of my boot. And he started licking it frantically. I started gagging with renewed vigour. Dad’s face was red, his eyes bulging from their sockets, and The Kid, well The Kid was ensconced in his 15 page Thomas the Tank Engine brochure on the back seat of the ute, oblivious and obviously unable to smell. ‘Can we put this train on my Santa list please Mum?’ he asked, without even looking up from his Bible. I heaved again.

Regaining our senses, we politely asked Jones to exit the ute cabin and instead run alongside us. We picked up the lick-block, delivered it to the excited cattle and then got on with our days.

Hubs has purchased a fake, plastic egg which we’ve left in a laying box on top of one of the lower hay pales, to encourage the lame chook to lay her eggs there, so we can keep tabs on them, and avoid any more rotten eggs, ever again. Ever. 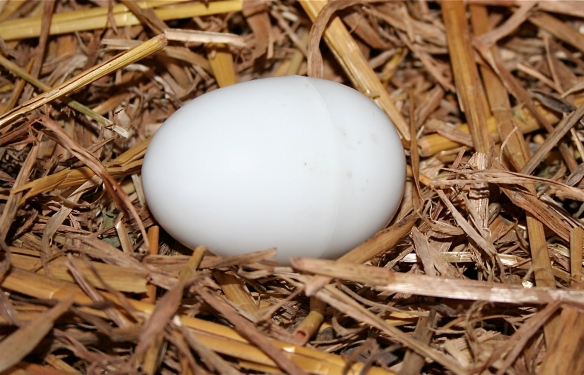 (Above: the fake egg, and below: the read deal) 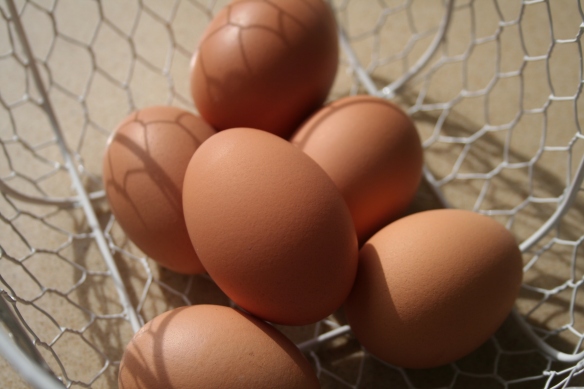 5 thoughts on “The Chicken and the Egg”