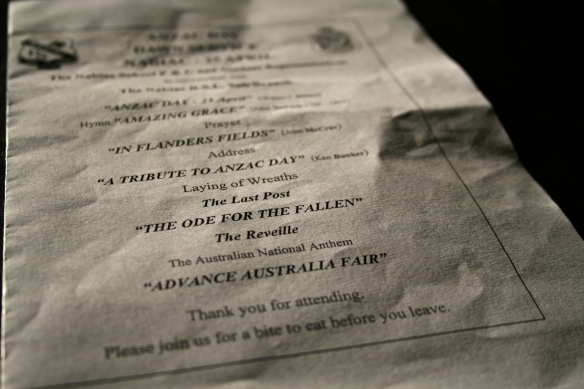 This morning, before the sun rose, I climbed out of my warm and cozy bed, pulled on my jeans, t-shirt, jumper and a jacket and headed off into Nabiac for the ANZAC Day Dawn Service. The service started at 6am and sunrise was officially 6.17am.

For those of you non-Aussies reading this from overseas (and I know there are at least a couple of you!), ANZAC Day commemorates the landing of the Australian and New Zealand troops in World Way I, on the Gallipoli Peninsular. Men; young, fit and bronzed, went ashore at 3.30am on 25th April 1915, in what was Australia and New Zealand’s first military operation of World War I. Those men could not have even guessed at the carnage that awaited them.

98 years later, Australians continue to gather at war memorials all over the country to remember the men and women who went to war then, and who have gone since.

When I lived in Sydney, for many years I went into the city’s Martin Place Cenotaph, along with thousands of other Sydney-siders to partake in the ANZAC Day dawn ceremony. Instead of the thousands, there were perhaps about 200 people gathered this morning around our local War Memorial.

I stood next to my Dad, his medals pinned to his breast. The kids from the local primary school officiated and they did themselves proud.

On the ABC news last night, they spoke of the many small War Memorials scattered across the length and breadth of this country, some in tiny communities. There was no nationally funded program to erect these memorials, they were paid for and organised by the members of each community. They stand, often in central public places, in these small towns and hamlets as a silent recognition of the sacrifices made. In regional and rural areas, they are also a reminder of the significant impact the World Wars and other campaigns have had on small communities. Fathers, sons and brothers lost. 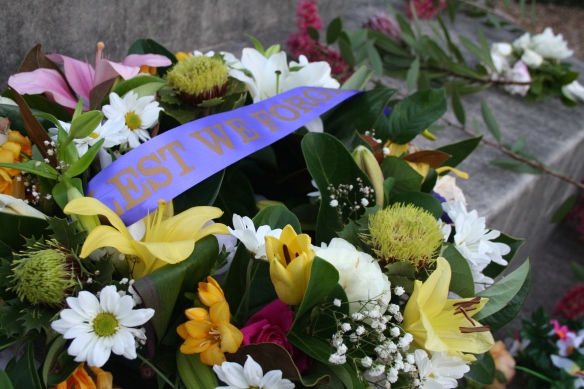 Our memorial lists all the men who went to war, those who made it home and those who didn’t (from The Boer Wars at the end of the 19th Century through to Vietnam). It needs to be updated with the names of those who have been to more recent war fronts. 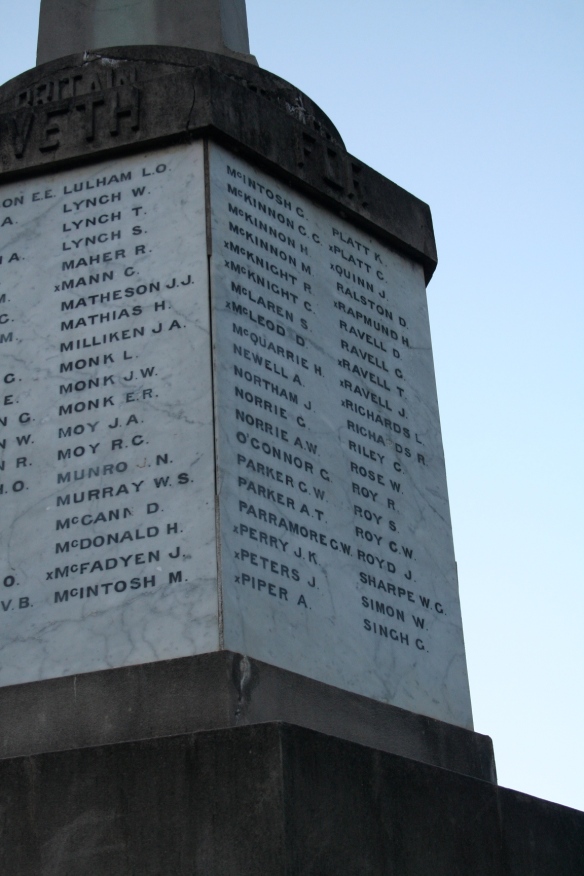 I returned home, to the sun streaming into the kitchen and a little boy wanting some porridge. I asked him what he thought ANZAC Day was about, and he said, with a big smile on his face, “ANZAC biscuits!” I cuddled him and figured that a more detailed explanation can wait for when he is older.

Next year, when The Kid is five, I think I’ll wake him early and take him with me to the local Dawn Service.

They went with songs to the battle, they were young.
Straight of limb, true of eyes, steady and aglow.
They were staunch to the end against odds uncounted,
They fell with their faces to the foe.

They shall grow not old, as we that are left grow old:
Age shall not weary them, nor the years condemn.
At the going down of the sun and in the morning,
We will remember them.

(Ode of Remembrance, from Laurence Binyon’s poem ‘For the Fallen’, 1914)

5 thoughts on “Lest we forget”