As I’ve been telling my boys since they were born, “S stands for Snakes”.

And then the other day, I stepped on one. I’d gone to retrieve a shovel on the edge of long grass. As I stepped away, I subconsciously registered that something under my foot (I was in sandals) had felt unexpected – it felt long, narrow, hard, … and soft, all at the same time. How can that be? By the time I turned around, still not really thinking, to see what might have been under my foot, I was a couple of metres away, and thought, ‘oh, I’ve stepped on a lizard!

So I went closer, and saw that it was a lizard with no head – its body, in fact, just kept going, and going, and going. I think it kept going for about 7 feet. That’s quite long really for a lizard. It’s also long for a snake. I can only assume it didn’t care I stepped on its tail because it couldn’t be bothered to move its head so far back.

Anyway, I was more fascinated than alarmed, because of the beautiful yellow and black/brown markings down his body. Diamond phythons are not ferocious or territorial. They have a painful bite – but they never, well almost never, bite – and I think I’m certainly too big to constrict. Besides, once it did decide to move, it headed away from civilization, not towards. Well, OK, its direction was uphill until it stopped under the deck to the studio, but hopefully out of sight out of mind?

So that was all quite exciting, and I leapt down to the house to tell my parents who were visiting, and warn the boys to stay away from the studio.

Then a couple of nice warm days later, my 5 yr old nephew was down near the vegie patch with Mum and Thomas, when he calls out in excitement – “I see a snake! I see a snake!”

“Yeah, yeah, sure thing”, I think… Snakes have, after all, been a vivid topic of conversation since my near death experience. I amble over and glance out over the verandah – and well goodness gracious me, he was right! There, metres away from him heading under the house, was another diamond python! Well, blow me down with a feather. By now of course I have become the resident expert, and was able to announce it was a different one as his markings were much darker. And he was shorter, and fatter (I like to use these scientific terms to back up my knowledge).

Well, we just didn’t know what to do. We fussed around like hens in a chook house. To remove or not to remove? If remove, how to remove? It was a little too close to the house for comfort. Especially with an adventurous 1 ½ yr old ambling around.

I phoned my neighbour, who was in the grips of a neighbourhood Easter BBQ elsewhere.

“Right, whatever you do, don’t hurt it (yes, I don’t want to hurt it). What you have to do is grab an old blanket – have you got an old blanket? – and throw it over the top of the snake (who by this time has curled up into a spiral and gone to sleep), and scoop it up and carry it away for release.”

“OK. Have you got an old rake? Just prod it gently in the direction you want it to go, and it will hopefully move. It might be tricky to make it go where you want it to go. Oh, and make sure it doesn’t rear up.”

“Get a bucket, and prod it into the bucket, pop something over the top, and take it somewhere to release it.” 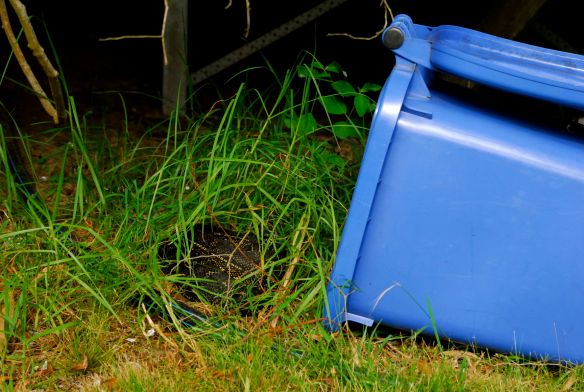 I tried to picture that bucket maneovering scenario. We got as far as this, and came to a grinding halt.

“Use a whipper snipper or something nearby – they hate vibrations and it will head off somewhere quieter”.

Dad had in fact been mowing all morning, and it couldn’t have cared less.

“If you get desperate, leave it where it is, and I’ll stop by later”.

Except he didn’t. Easter celebrations got in the way. Whilst waiting, we had managed to get close enough to put a storage container over it while it slept, and popped a brick on top so it couldn’t push through as we didn’t want to lose it. Then we got worried about suffocation, so I edged a stick into the base to lift it oh so slightly off the ground. The hours passed, nothing happened, and we finally carried on our business. By twilight though we decided he wasn’t coming. So I tried ringing the local snake wrangler but got the wrong number. This complete stranger of a man on the other end of the phone – I think his name was Jim – was however very helpful, and told me to just let it be. “They have a radius of 30km. And they’ll eat your mice and rats”.

Yes, now that I think on it, we have mercifully been free of rodents for some time now, which is quite unusual for our house. Well, there’s nothing like having a complete stranger tell you what to do over the phone – “Hooray for the snake!” we all exclaimed.

So we took off the container, it raised its head oh so slightly, as if it was having a little wake-up yawn, adjusted itself, and was so traumatised by the whole experience, it went back to sleep.

So we’ve decided we’ll keep it, somewhere within 30kms, as our very own pet. And fingers crossed we’ll never see it, or a mouse or rat, again.