When I was pregnant, I remember having fanciful notions of idyllic, precious moments I would share with my child in the garden. I’d seen babies strapped to their mother’s backs in Guatemala as the mothers tilled their land. I wanted to do this. People write books about ‘gardening with children’, espousing the benefits it brings. I wanted to be part of this. Earthy mother, child connected with nature. I wanted it all.

And then The Kid was born. I never quite got the baby wrapping thing right. I was in fear of him slipping out of his cocoon as I leaned over and planted seeds. Instead I wrapped him up in his cot to sleep and headed outside into the garden on my own, keeping one ear out for his cry. I enjoyed the alone time. Then as he got older, I would take him into the vegie patch. I wanted to teach him about how plants grow, where vegetables come from, how good they taste when they’re home grown. But quite frankly, toddlers in the garden are destructive. And I don’t recommend mixing the two. What they love is to be naked, to be given the hose and a pile of dirt and to make mud. This is when they are happy. Not digging neat holes, and planting straight lines of seeds.

I remember one occasion in the vegie patch, planting seedling after seedling while The Kid ‘pottered’ around happily with me, exploring. We were enjoying ourselves. This is good, I thought. And then I went to throw some weeds in the weed bucket, peered into it, and saw, lying at the bottom, shriveled and parched, all the seedlings I’d just carefully planted. The Kid had thought he was helping, he’d seen me pulling out little weeds. How was he to know the difference I rationalised? It was still frustrating.

I recall another attempt at bonding in the garden, digging a hole together, and me constantly and gently (at first) reminding The Kid to keep the soil in the garden bed, not to throw it on the paths. “In the garden bed, little man. Come on, let’s keep it in the garden bed. That’s right, over here, over here, OVER HERE!” But it was so much more fun flinging the dirt everywhere but the garden bed. In the end, as a small shovel-load of dirt sprayed into my eyes and open mouth, I realised the only thing to which I was bonding was my rising level of frustration. And so we walked out through the vegie patch gate, hand in hand, to tackle another less structured task, like making mud.

But now, I am pleased to say, a couple of years down the track, The Kid having just turned 4, we love gardening together. Sure, he still has a somewhat limited attention span. But we really do enjoy ourselves. A couple of weeks ago we planted carrot seeds. The ones that come embedded in biodegradable tape, so they are spaced out for you, and all you need do, is dig a trench (which we did together), cut a length of tape, and bury it. We each held an end of the tape from opposite sides of the bed, lowered it into the trench and The Kid filled it in. We now watch excitedly as the tiny seedlings emerge from the mulch.

We’re harvesting strawberries right now, and I love watching the sparkle in his eyes as he spreads the green leaves and uncovers a bunch of red, juicy berries, ready for the picking. He eats cucumbers straight from the plant, lettuce leaves as we wonder down the paths, and he was so excited by our recent watermelons. He loves the zucchinis, honeydew melons and pumpkins too. He helped me plant all of them, and he’s proudly watched the plants grow and slowly take over the northern side of the house garden.

He’s even developing an appreciation for the flowering plants in the house garden. Yes, despite the best efforts of the chickens, rabbits and bandicoots, some plants are managing to survive. The Kid loves to smell the flowers, pick them and count their petals.

I am endeavouring to have flowers in the house as often as possible. Flowers from our own garden. They are meagre posies, but they are fresh and colourful and we all love them. Fingers crossed, come Spring I’ll be able to fill a few more vases. 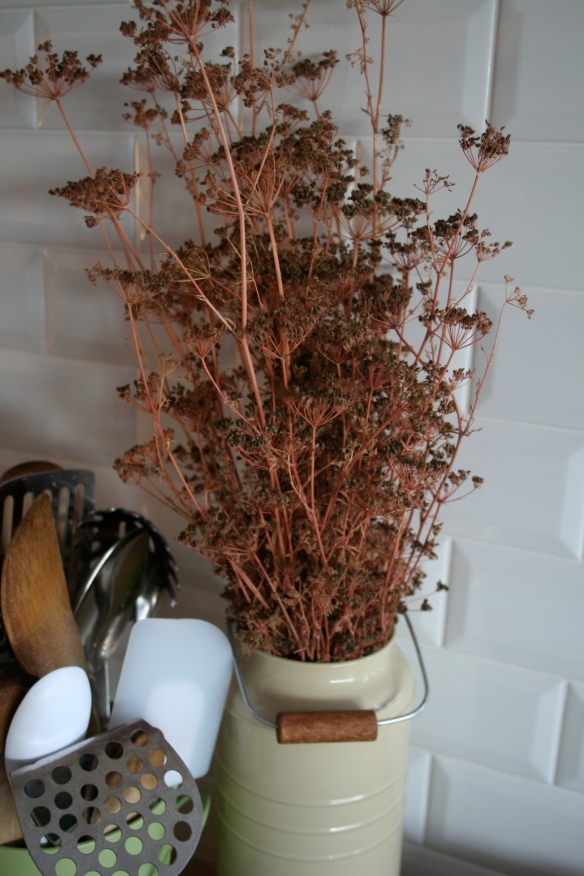 The Kid is becoming so attached to the flowers, that he even cried when I trimmed back the lavender bushes, removing the last few flower spikes. He said he loved the lavender and he didn’t want it to die. The Derwent Grey lavender hasn’t flowered again, yet, but the French Lavender has beautiful thick flower spikes at the moment and The Kid is happy. I’ve assured him the other lavender will come back too.

He’s starting to understand that the garden changes with the seasons, that flowers come and flowers go. He is now waiting for the leaves on the trees to turn orange. We have planted a Chinese Tallow and an ornamental Pear near the house and they provide an incredible display of autumn colour. Then their leaves drop, and it will soon be time to start lighting the fire. A new season. I think it is good for children to understand this. That there is change and that change is good. And that while so much else may be going on in our lives, some of it terribly sad, there is the constant of Mother Nature and her seasons. This is good for us to remember too.

And in the meantime, I am really enjoying teaching what (little) I know about gardening to my beautiful boy. What a privilege.

11 thoughts on “Gardening with kids”