Boys reflecting on the weather

I’ve talked about our water woes before (see past post ‘Water Works’), but in the country you can never talk about it too much. Why, just the other day we got together with Bec H, Hubs, and The Kid and managed to have almost an entire evening of conversation devoted to the weather. In a quiet, self-reflective moment I noticed it and thought –  ‘ah, farmers at last. Look at us. Obsessed by the weather’.

I remember my own relatives in the Riverina having a fixation on the weather whilst I was growing up. Then when I worked in ABC TV’s newsroom, they berated me for only having 3 minutes or so of the news bulletin dedicated to the weather of the day (not that I was in any position to do anything about that). The importance of the weather in their daily lives was so prominent they used to watch not one, but two – yes, two – weather forecasts in the news in a row. They used to switch from Victorian ABC TV news weather (which was on a few minutes earlier), to NSW news weather (on a few minutes later), to check what was going on. To humour them, I got Mike Bailey our weatherman to sign some ‘Mike Bailey’ cards and I posted them to them. I believe they were received with great excitement, and like a weather god he made it onto their fridges with much pride. As a self-obsessed young 20’ish city professional, I confess I used to think their obsession was a little, well, obsessive. Now however, I can see they had thousands of sheep, and thousands of hectares of crops to think about. To buy in feed or not? To shear or not? To harvest the crop or not? Important questions, livelihood questions, sometimes life and death questions, reliant on something they had absolutely no control over – the weather. How incredibly frustrating, and, so often, devastating.

By contrast, our weather woes really are minimal. Crops? We have none. Livestock? Our 10 steers aren’t going to drink dry the creek from which we pump just yet. As for us, well, after many months now of no rain, (admittedly, if I was a real farmer I would know exactly how long it has been), things are looking and feeling a litte… crisp.

But finally, Dougal buckled under the pressure, and off he went. He returned soon after looking a little grim. “Well?” I asked… “There’s about a foot of water left” he replied.

When you don’t know when you’re next going to get any rain, that’s not a great result. So without further ado, I hopped on the phone to order some in. “Don!” I said, “It’s Bec C, we need some more water. But don’t worry, I’m getting in ahead – we’ve still got a foot or so left in the tank, so it’ not urgent. We can wait a couple of days!” I said helpfully, silently congratulating myself on my foresight as usually when we have to get it tanked in we’ve got nothing but air coming out of our tap. I had last seen Don about 6 weeks ago, when he had kindly suggested I book ahead for our next load, ‘just in case there was a waiting list’. Of course I did nothing of the kind…Surely it would rain heavily for many days before then?

Surely not. It hasn’t really rained, a bit here, a bit there, but not enough to alleviate the problem. And so I only had myself to blame when Don said “well, I’ll get there as soon as I can (phew), but I should tell you there’s a 17 days waiting list and 143 people waiting to get a truck load of water…”. It seems it’s even become so dry people who have never ordered water before are ordering it in for the first time. 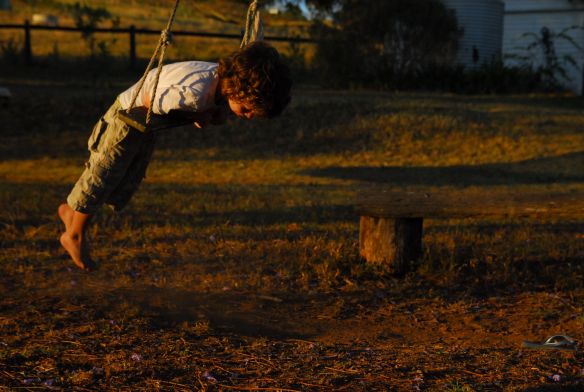 Four and a half years ago, we ran out of water only to have the new water delivery man inform us that he would ‘have to empty the truckload of water down our driveway because he didn’t think he could physically reach the tanks’. Then, freshly home from hospital that week with a newborn baby and a ceasarean scar, I believe I said ‘You’ll have to excuse me Steve (that was his name). I need to remove myself from this situation before I completely lose it”, at which point I headed into the house in a panic leaving Dougall to sort it out. Fast forward to today, and I am proud to say I must have grown as a person, because my response to the 17 day waiting list was to burst out laughing. What else could I do? I had noone to blame but myself.

So we’re now onto Day 4, and counting. Thomas can’t believe his luck, as he has never gone without so many baths. The washing is piling up, and our showers are so quick they barely hit the skin. The creek hasn’t quite run dry yet, but the grass is as brown as a snake and dead, and the water in the troughs is looking a little stagnant and slimey. My poor garden, which up until now has given me what is obviously a false sense of success (I should quickly add here I am not referring to my vegie patch), is now floundering under my ‘live or die, but I won’t water’ (mainly because we don’t have any) regime.

So everyone who lives on ‘town water’, enjoy your shower. Enjoy your clean clothes. Enjoy your tea. And think of us. Only 13 days to go.

PS – as I write, it is raining heavily (how typical). I shall not be wishing it away!