On The Road Again

Well, I was startled (what a great word – makes me think of an animal in the wild) just then to see my last entry was at the end of August (many thanks to Bec H. who jumped into the void in my mental absence and … double-blogged! Impressive, I know). But where has that time gone, I hear you all asking?!!

Well, I’ll tell you. It’s time for ‘Confessions of a Band Manager #2’.

A quick recap – I hurried home from my 6 week work stint in Sydney to my badly dressed stripey sock incident at the local farm markets. And then I just kept running.

It all started to go askew when, in all our wisdom, we decided the week I got home to put on a 3 muso show at a local hall. [Inhale]. Right. 6 weeks to get leaflets, posters, tickets, promo, venue, logistics, etc organised, with 2 children wrapped around my legs. Dougal’s ‘don’t worry darling, I’ll be there to help you’ vanished in his cloud of dust (yes, it’s very dry up here), as he realised he had less than 6 weeks to record and mix his big band’s album in Sydney. I waved him off with one of those faux smiles [exhale] because that 6 week deadline also coincided with his big band’s tour down south – which I had decided to organise 10 months earlier (what was I thinking?!). Once I had the venues locked in, it hadn’t seemed like that big an undertaking – I mean, how hard can it be to organise 15 people to go on the road for 4 days?

Hmm… well, it’s quite hard actually. Not only the logistics, but making sure word is out enough to get an audience to the shows in the first place. I keenly feel this responsibility – I don’t know any other band managers, so I can’t ask them if this is normal or not. It doesn’t matter if the venue is paying the band to perform, or if we are taking the risk ourselves by relying entirely on ticket sales to pay everyone – I still feel a duty of care really, to make sure it is worth everyone’s – the venue, the performers – while. After all, it’s their livelihood, and our reputation, at stake, for the night.

Aha! Confessions of a Band Manager AND Publicist AND Promoter!

Putting music on in the country is different to the city. In the city, a show becomes a gig amongst many, and the date may come and go on people’s calendars without a flicker of media interest. In the country, a show becomes an event – people talk about it, look forward to it, and are proud to support it. Being a show with strong performing credits and songs, the local media are always interested, and the packed rooms, attentive audiences, and beautiful venues make the whole experience incredibly rewarding.

It’s just that little bit riskier though, as every muso, dancer, and soundo has to travel hours to get there.

So the local small show with 3 musos which we put on is a success, and sells out to a packed house of almost 200 people mostly on word of mouth (got to love that country grapevine). The pressure intensifies for the upcoming big band tour. I realise we have completely forgotten about organising artwork for the CD, so with 2 days to go till that CD deadline, the pressure turns our house into a pressure cooker. Dougal is still in Sydney, and the boys are hanging onto my legs even more tightly, as their world shifts and tilts around them.

Thank god for Beautiful Sarah, who has come into our lives on Mondays, taking care of baby James while Thomas is off at school. Wow, how I look forward to those Mondays. My list of things to do is almost as long as the day itself. I have to fight my rising panic when I look at the clock and see the time ticking over to Sarah’s departure. Mow the lawn, pump some water up from the creek, feed the cattle, feed the dog, feed the children, feed myself, scoff a glass of wine, ring the papers, ring the venues, ring the radio stations, email the world, email the band, scoff another glass, oh my god where does it stop.

It stops – sort of – now. The tour is over, is a success, everyone is happy, and the highly anticipated movie ‘Confessions of a Tour Manager, Band Manager, Publicist, Promoter, Pseudo-Farmer, Wife, Mother, and Blogger’ will be released very soon.

So here I am, miraculously still sane. One of the attractions of moving to the country was embracing a slower life, a more relaxed pace. But really, we write our own style, and no matter where we are it is always going to follow us. Although I can only assume that if we still lived in the city, we would be moving so much faster again I would probably be dead. 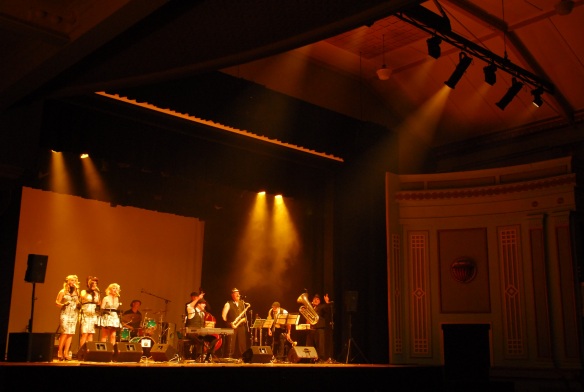 2 thoughts on “Confessions of a Band Manager #2”