Not the favourite time of day for people with kids. And who said it only goes for an hour? Ha. If only.

Recently, our Witching Hour was getting a little out of control. We’d become too relaxed about the whole routine and it was getting later and later. And quite frankly, come dark, I need some time on my own.

So, last week, after a particularly long and drawn-out evening (with The Kid protesting, objecting and negotiating at every turn), Hubs and I decided it was time to take the bull by the horns and get our ship into shape, so to speak.

The following night, we embarked on a new regime. To be fair, the order of events didn’t change, we just tightened things up. We went from being completely laid back about it all (which ironically, had resulted in me being completely wound up) to being regimented and structured (which ironically, has lead to much more relaxed evenings). Who would have known? Probably us, if we’d bothered to read a book about it. But we hadn’t. Instead we took a leaf out of my sister-in-law’s book. If her 2 girls can be in bed, usually asleep, by 7.30, then so can The Kid. Surely?

Next day, on the eve of Hubs’ departure for a week of work, we noticed that one of our steers was lame. We think he got something stuck in his hoof and it led to an infection. The swelling was traveling up his front left leg and he was having trouble walking.

We got him into the yard paddock, and on the morning of his departure, Hubs visited the vet and rural supply store to load up with penicillin and needles (big mothers). Daily injections of 16 mls, for the next 5 days, he said, as he left for the week. Great.

Having never injected a steer before, I was a little nervous. Luckily I was able to enlist the help of friends, Mark and Judy who kindly came over at about 5.30 each evening to help. 5.30pm because that was when they could get away from work. Not ideal for me, but you can’t be picky when you’re relying on others. I just appreciated their support. Each day I managed to get the steer into the yards and then into the holding pen and most days into the race. He’s very easy to handle and a gentle soul, except, as it turns out, when it comes to needles. I had plans of watching the first injection and then doing the rest myself but he kicked up such a stink, I decided to take up Mark and Judy’s offer of daily visits.

The Witching Hour just got a whole lot more complicated. With Hubs away, my Mum off on a holiday, I called on Dad. He managed the mealtime while I was down at the yards. All things considered, it went quite well. There were only a few hiccups: 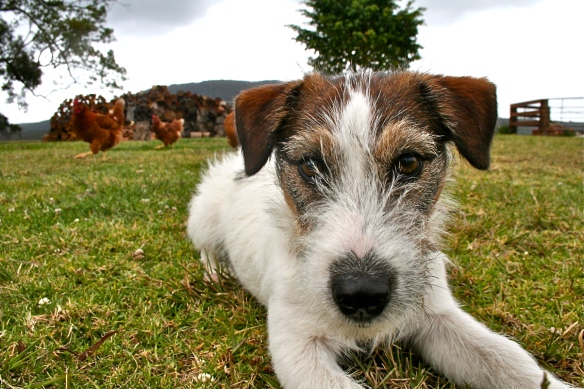 Despite the shenanigans, the steer got the penicillin he needed (we even did a 6th injection to be sure), and The Kid was in bed, lights out, each night by 7.30pm.

Thankfully, the steer has made a full recovery. He’s walking beautifully and this morning we let him back in with his mates. He’s as Happy as Larry.

3 thoughts on “The Witching Hour”