Well, the worms to be accurate. They’ve turned and they’re doing well. Finally. And I feel like it’s cause for celebration.

I talk, of course, of the worms in my worm farm. Do you have a worm farm? I do. I’ve had it for a while, some 3 years now, I think. But I feel like I’ve only just started to master the art of worm farming in the last 6 months. I don’t by any means profess to be an expert, but I’ve learned some valuable lessons and I’d like, if you don’t mind, to share them with you.

No matter what the size of your garden, you can have a worm farm. In fact, even if you only have a paved courtyard or a small balcony, you can still house the little suckers. And if you have a few pot plants or herbs growing in pots on your window sill, they will absolutely love you for it.

My worm farm is called ‘Can-o-Worms’ (and no, just for the record, I don’t receive any endorsements for mentioning the name). It’s round in shape (rectangular products are available too) and you can get it at large hardware stores. I ordered mine online and it was delivered to me, complete with 2000 worms. Don’t worry, they were neatly and carefully packaged up in a bag. I also received a “worm bedding block” of coir which had to be soaked in a bucket of water and this became the worm’s initial food. The kit came with clear instructions for assembly and it was all pretty straight forward. Add the soaked coir bedding, the worms, some water and cover them in about 10 layers of newspaper cut into a circle, and there you have it, a working worm farm.

Lesson No. 2: the worms do actually need to be fed. Regularly.

Composting worms, apparently, consume up to 50% of their own body weight in food in each day. And they reproduce like rabbits, or probably more accurately, like composting worms. They increase in numbers rapidly, but amazingly will stop reproducing when they have filled their current dwelling to capacity. Clever aren’t they?

My early mistake? I just didn’t feed them enough. You really need to be topping up their food every second or third day, perhaps every day for a really productive farm. If they start eating the newspaper blanket that you cover them with, you know it’s time for more food. I didn’t get this early on, and so all those things that the brochure said? Well they came to naught. I managed to single-handedly kill 2000 worms. Poor buggers. I can’t even think about the torment they endured.

Determined to make this thing work, I took the plunge and bought another 2000 worms last year from a guy at our local Farmer’s Market. I asked him questions, told him about my failed attempt. He encouraged me and sent me off home to start again. 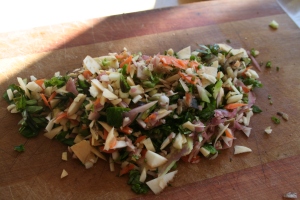 And I’m pleased to report, that this time I think I’ve got it. The worms are thriving, and they are multiplying and by jove, are they producing rich, nutrient-filled organic matter. Hooray!

There are two by-products of a worm farm – worm wee, hmm, I know.., and worm castings, or vermicast. The worm wee gathers in the bottom tray of the worm farm and there is usually a tap which you can turn on to release the wee. Mix it in a watering can with water, roughly 1 part worm wee to 20 parts water. Each time you feed the worms, water the top blanket of newspaper so it is damp. The water will cascade through the farm ensuring there is sufficient water in the lower tray enabling you to drain out the worm wee. Without the water the whole system will dry out. 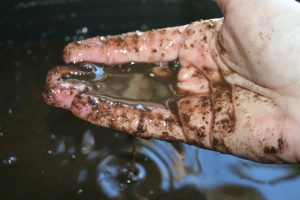 Lesson No. 4: Worm wee and worm castings are high in nitrogen.

Nitrogen is a great supplement for plants where you’re wanting extra leafy growth. Like, for example, if you’re growing a hedge. In the vegie patch it’s great for lettuce, rocket, herbs, asian greens etc. but avoid watering things like your tomatoes as you’ll get lots of lush green growth but not so many tomatoes. The worm castings (once the worms have migrated to a higher level in the farm leaving the lush, delicious castings behind them) can be scooped out and mixed with your regular soil to improve its quality.

I have to admit, I’ve become quite attached to my worms. I feel a degree of fondness towards them and I love to pick them up and feel them wriggling and writhing in my hands (not for long, mind you). So we now have 7 goats, 5 chickens (yes, we got chooks last week – but that’s another post), 3000+ worms (no I haven’t counted them), and 1 puppy. The family is growing. In a few weeks, we’ll be joined by 15 head of cattle. That too, is for another post.

In the meantime, I must go and feed those worms.

A week after watering with worm wee, the lettuce was going nuts

5 thoughts on “The worm has turned”