I know there are people who live in the country who don’t have dogs, but to me, they’re an integral part of rural life. Walking through a paddock without a dog at your heels just doesn’t feel right. They’re also wonderful companions. They look at you as if to say ‘how can I help you? How can I support you? What can I do for YOU?’ They’re not just man’s best friend, they’re everyone’s best friend. 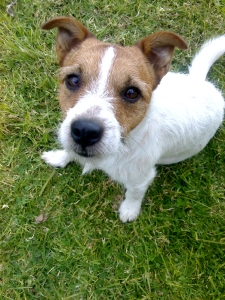 On the 18th August 2011, our beautiful, funny and loving Jack Russell terrier, Spencer, went missing. For days and weeks we searched and we cried. No, we sobbed. We stuck up flyers, we put ads in papers and on the radio, we made phone calls and we searched again, and again. Hubs and I held one another in our grief as we tried to keep up happy faces with The Kid. Weeks later The Kid asked me, ‘Is Spence still lost in the long grass? Will we see him again? We’re so sad aren’t we?’ Obviously we didn’t do a great job of concealing our loss.

We got Spence at a time when we thought we might not be able to have children. And so he was our first born. He filled a big hole in our lives and he filled it in a big way. He wangled his way into our hearts like red dye gets into a load of whites.

In the children’s movie, Skip, Kevin Bacon’s character, who’s resisting the pressure to let his son have a Jack Russell puppy says (in his delightful southern drawl) “a dog is just a heartbreak waiting to happen”. He was right. When Spence went missing, our hearts indeed broke.

While we hoped that he would return, and we waited for him to trot up our driveway, he didn’t. He hasn’t. It’s 10 months now, and perhaps one day we will get a call from a vet to say ‘we have your Spence here’ but we also might not. And so I wanted to get another puppy to fill the void. Spence was my companion when Hubs was away at work. He was my shadow and my confidante. His favourite time of day was when The Kid was safely tucked up in bed, and he and I were alone. He would stretch out in his bed and say ‘thank god, some peace and quiet – let’s enjoy it Bec’. We still miss him so much it hurts, it feels heavy.

And so to the task of finding a new pup. We considered a rescue dog. Particularly after Beautiful Sarah, who sometimes looks after The Kid, drove out of our front gate, and I noticed a bumper sticker on her car, ‘Don’t breed or buy, when shelter dogs die’. Ouch, I felt the pang. So we looked at a number of rescue dogs, but my ultimate reservation was getting an older dog whose background we didn’t know, when we have a 3 year old child. It was too much of a risk for me. Besides, there is something very special about watching a young child bond with a puppy.

Fast forward, and Jones the Jack Russell (yes, another one) has come into our lives and we have fallen head-first back into.. no, not love, yet, but the abyss of sleepless nights. Oh sleep, how I love you! With guests staying and not wanting to subject them to a night of control crying in the laundry (not the guests of course, Jones was the one in laundry), I spent Jones’ first night with us, trying to sleep on the couch in the TV room – with him. I slept fitfully, worried I was squashing him, but Jones was as Happy as Larry, so long as he could feel my warmth and beating heart. Operation Control Crying (actually I’m told it’s now “responsive settling”) begins tonight.

On the upside, Jones is adorable. He is cute. He is warm and cuddly. As I sit here typing this, he is curled up on his bed at my feet, puppy ear flopped over his head, exhausted, and having puppy dreams. My hand on his little body is enough to calm him sending those troublesome dreams packing. The Kid already loves him and he’s learned to carry him safely. He carefully puts Jones on his bed at night for story time. He was surprised to discover that puppies are more interested in your soft toys than they are in listening to Hairy Maclary, but we can work on that I told him.

While there’s been no ‘closure’ with our beloved Spence, hopefully Jones marks the beginning of something new. What I want to know is, is it possible to love another dog as much as we loved Spence? Will Jones work his way into our hearts in the same all-consuming way? I don’t know the answer yet. I’ll have to let you know in a few months. But I think I’m falling for him. 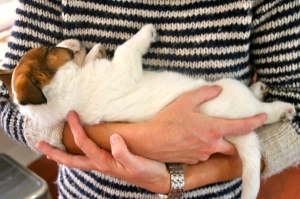